The following is a chapter from Influence PEOPLE: Powerful Everyday Opportunities to Persuade that are Lasting and Ethical. This chapter is particularly appropriate just before New Year’s Eve. I hope it helps you get 2021 off to a great start.

If you’re like many people, then you make New Year’s resolutions; and, if you’re like most people, you break your resolutions within a week or two. According to one study, more than half the people who make resolutions are confident of achieving them, yet only about 10% do so.

That’s unfortunate because most resolutions are good! Here are some of the most popular New Year’s resolutions:

The list is admirable so why are these goals so difficult to achieve for nine out of 10 people? There are as many reasons as there are resolu- tions and dwelling on those reasons would not be as beneficial as giv- ing you scientifically proven ideas that can help make next New Year’s different. I’ll share an influence technique that can help you PAVE the way to success in the New Year.

In the study of persuasion there’s a powerful motivator of behavior known as the principle of consistency. This proven rule tells us people feel internal and external psychological pressure to act in ways that are consistent with their prior actions, words, deeds, beliefs and val- ues. When we act in consistent ways we feel better about ourselves and other people perceive us in a more favorable light. Mahatma Gandhi put it this way, “Happiness is when what you think, what you say and what you do are in harmony.”

There are four simple things you can do with consistency to help you keep your resolutions. These easy to implement ideas will help you PAVE the way to success because they’ll dramatically increase the odds that you’ll follow through on your New Year’s resolutions – or any other personal changes you want to make.

Public – Whenever you make a public statement, whether verbally or in writing, you put yourself and your reputation on the line. The mere fact that another person knows your intentions and might ask you how you’re doing, often motivates you to follow through.

This came to light in a study with a group of students who wanted to improve their college grades. One group was asked to share their goal with some people. One group kept their goals in their heads and a third group made no specific goal whatsoever. As you might guess, the group with the publicly stated goals succeeded, with nearly 90% of students increasing their grades by a full letter grade! With the other two groups the results were identical and poor. In each group fewer than one in six students improved by a full letter grade. It’s worth noting, they were all given the same study materials so they all had the same opportunity to better their GPA.

Recommendation #1 – Publicize! Share your New Year’s reso- lution with another person, or group of people, and ask them to hold you accountable.

Active – You have to actively do something. Merely thinking about a resolution, just keeping it to yourself as some sort of secret, will lead to the same results as people who don’t make any resolutions. In other words, nothing will change. However, when you do a few things, you build momentum towards your goal. Each active step gets you closer to success.

Recommendation #2 – Make sure you have to take some active steps. It could be as simple as buying a book about the changes you hope to make or writing your goals down and posting on your mirror.

Voluntary – This has to be your goal, not someone else’s goal for you. If you’re trying to do something – quit smoking, lose weight, get in shape – it’s not likely your motivation will last if someone basically forced you to do it. The goal has to come from you because if it’s imposed it’s not likely your willpower will last long. Samuel Butler said it best when he wrote, “He who complies against his will is of the same opinion still.”

Recommendation #3 – Make sure it’s something you really want to do – of your own free choice.

Effort – It was already noted that you have to actively do something. In other words, making the commitment should require some effort on your part and the more effort you expend setting up your goal, the more likely you are to succeed. Something as simple as writing down your resolution in a journal can make a difference but don’t stop there. Share it with others to fulfill the public requirement, which gives you more bang for the buck!

Recommendation #4 – A little more effort, like committing pen to paper in a daily journal, will increase your chances for success significantly.

How can you Influence PEOPLE? Sometimes the person you need to influence is yourself! Try to PAVE the way to your success and enjoy the results. If you’ve failed at your resolutions, or other types of personal change, then why not give the PAVE approach a try? 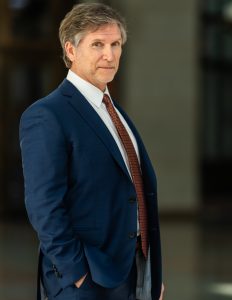 Brian Ahearn is the Chief Influence Officer at Influence PEOPLE, LLC. An author, TEDx speaker, international trainer, coach, and consultant, he’s one of only a dozen people in the world personally trained by Robert Cialdini, Ph.D., the most cited living social psychologist on the science of ethical influence.

Brian’s first book, Influence PEOPLE: Powerful Everyday Opportunities to Persuade that are Lasting and Ethical, was named one of the 100 Best Influence Books of All Time by BookAuthority. His second book, Persuasive Selling for Relationship Driven Insurance Agents, was an Amazon new release bestseller in several categories. His new book, The Influencer: Secrets to Success and Happiness, is now available on Amazon.

Brian’s LinkedIn Learning courses on persuasive selling and coaching have been viewed by more than 400,000 people around the world.

6 Reasons Santa is the Greatest Salesman Who Ever Lived