Yes, it’s mid October and I’m already writing about Christmas. Ho, Ho, Ho, the only surprise might be that I’ve not written about it sooner. I’m not sure what stores are like where you live but around Columbus, Ohio mega-malls are big business and very soon you’ll see Christmas on display. What this means in many cases are great deals to lure shoppers into the stores early. In the retail war the initial battle is to win your attention. “Battle” is not too strong a word because according to Dawn Hudson, Senior VP Marketing at Pepsi, “The average American receives more than 3,000 marketing messages a day!”
So how can a marketer help a retailer stand out from the crowd? A favorite tactic of marketers is to utilize the principle of scarcity to motivate you to get off the couch and visit the store. Scarcity is the term we use to describe the psychological response where people tend to place more value on things when they believe those things are rare or dwindling. If you’re wondering why this is used any more than other methods that’s because it works primarily on the subconscious level. In his book Influence Science and Practice Robert Cialdini describes our almost automatic response as a “click whir” phenomenon.
A while ago a friend at work who sat in on my influence training stopped by to give me an advertisement that caught his eye. He was aware of the influence approach Bed, Bath and Beyond took in this mailer his wife received. 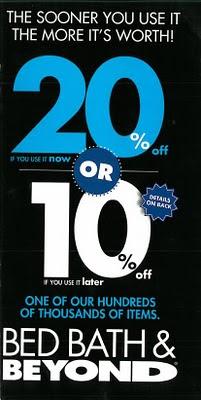 The 20% coupon isn’t much different than most retailers. What was different with this one was the call to action: The Sooner You Use it the More it’s Worth! By using the coupon right away you save 20%, but if you wait it’s only worth 10% later. I think that approach is creative for a couple of reasons.

First, the ad incorporates the compare and contrast phenomenon. Most things only have value, or make sense in relation to other things. For example, if I offer you $20 you’re probably pretty happy. But, I’m willing to bet if I offer you $10, then change my mind and give you $20 instead, you’re much happier than having been offered $20 straight up. Why? Simple, now my offer is twice as much as you originally thought you were going to get. If you don’t believe me try it with a few people sometime and see how they react.

The second element of the ad that works well is how it incorporates scarcity. If you don’t use the mailer now it’s only worth half as much later. On the back of the mailer you would have seen the recipient had four full weeks to save 20% on one item, then four more weeks to save 10% on a single item. Something about that seems more motivating to me than a straight up use it or lose it approach.

Pay attention as the Christmas ad bombardment begins. Not only will you see scarcity applied, you’ll see consensus too. After all, if everyone is buying a certain gift you’re kids will probably want that same item too. But if you don’t hurry you might just miss that golden opportunity so get it soon for your kid’s sake! Seriously, there may be great deals and some items might truly be limited but with your eyes open to how retailers are trying to motivate you at least you can pause, think and make the best decision, instead of an impulsive one.
Brian, CMCT
influencepeople
Helping You Learn to Hear “Yes”.

The Apology Heard Around the World

Flubber Shoe Ban by NBA Will Cause Sales to Jump!

Influencers from Around the World - The Unavoidable Influence of Death

Look for the Best in Others and Change Your Experience

Take A Look At This Persuasive Marketing Piece

They’re Among Our First Words
1 reply

The Trappings of Success Flubber Shoe Ban by NBA Will Cause Sales to Jump!
Scroll to top