Last month my friend Mike Figliuolo of thoughtLEADERS sent me a blog post he thought I’d enjoy. It was on the heels of my first anniversary writing Influence PEOPLE. The blog post was called, “The 8 Habits of Highly Effective Bloggers.” If you’re into blogging you might want to check it out.

As I read the post I felt good about how I’d approached writing this blog. But the real take way for me had to do with something other than Copyblogger’s content; it was their effective use of a principle of influence that caught my eye. Take a look at the picture below and see if you pick up on what I saw.

Depending on how good your eyesight is you might have been able to pick out three things that effectively tapped into the principle of consensus. This psychological principle tells us people are often swayed by the crowd. When we see many others doing something we take that as a clue that it might be the right thing to do. So how did Copyblogger effectively use the psychology of persuasion to their advantage? 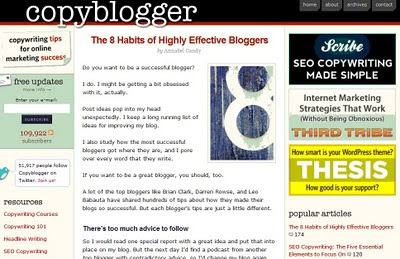 First, near the upper left of the website there’s a section where you can sign up for email updates. No big deal, that’s pretty standard. Where they leveraged consensus was by letting you know there are 109,922 subscribers. My frame of reference; more people read Copyblogger each week than attend an Ohio State football game! 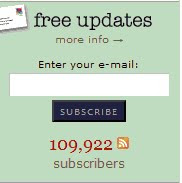 Third was something that might not have stood out quite as much. On the right hand side of the page is a section with popular articles. Knowing those are some of the more popular posts will get people to read them just like more people order the most popular dishes at restaurants. In addition, immediately after the

two articles you can see the numbers 174 and 120. If more than 100 people are commenting on these articles doesn’t that make you just a little curious why they’re commenting and what they’re saying? I’d say that’s subtle, yet strategic use of consensus to keep people looking at the site.

In each case Copyblogger could have omitted the numbers but they’d lose out on opportunities because those numbers will cause more people to take action in way that will increase readership. Now, having shared that, there are times when you want to leave the numbers out because they can work against you. For example, what do you think a first time visitor to Copyblogger would have concluded if they only had 100 subscribers or 50 Twitter followers? That might actually work against people deciding to become subscribers or followers. Also, if the numbers are low on comments people might not bother to look at those older posts.

What does this mean for you? As a general rule; if your numbers are not high then don’t show them because you could be shooting yourself in the foot. I’ve seen this with a feature on many websites that lets you know how many people are attending a particular event. I outlined this last year in an article I called “Make Your Next Event the One Everybody Attends.” What constitutes a large number will vary depending on many things. For example, 15 people attending an event is not many but if there are only 20 seats available it’s a large number by comparison. Showing that number will also invoke the principle of scarcity because only a few seats are left so sharing 15 in that context could be very persuasive.

So remember, consensus can work for you or against you depending on the situation. Make sure you’re thinking how your audience will perceive the numbers you share and you’ll probably do just fine. Of course, referring back to this article would be a smart move too.

To Be More Productive Try 23 and 7

A Wealth of Information Creates a Poverty of Attention!

Choose Your Words Carefully Because They Matter

Influencers from Around the World - Moments of Power: How to Identify and Use Them

“There is nothing either good or bad, but thinking makes it so.”