Some of the best things about blogging for me have been meeting new people, making friends and learning about other cultures. Many of the people I’ve come to know through blogging are from all parts of the globe because people in more than 95 countries have taken time to read Influence PEOPLE! That stat blows me away! 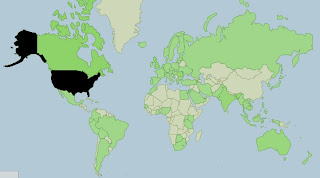 Because the audience is becoming so diverse I’ve decided to try something new. I contacted several people in other countries who also have a deep interest in ethical influence and persuasion to see if they would write guest posts for Influence PEOPLE from time to time. They said “Yes” (see, persuasion works!) so I’d like to introduce you to four gentlemen because you’ll be reading their thoughts on influence in future posts.

A chemical engineer by training, about 15 years ago he became passionate about the study of personal growth. Over the years he’s channeled that passion by attending dozens of seminars and training courses around the world, learning from some of the best international coaches. An avid reader, he’s read countless books on subjects like persuasion, time management, coaching and goal setting.

He’s lived in France, Belgium, the USA and China while working as a technical manager and as export manager for several multinational companies in various industrial fields. During that part of his career he had the opportunity to take part in and manage negotiations in several international business deals. He presently works as a consultant for business internationalization, with a focus on Asian markets.

Marco has always been passionate about persuasion, negotiation and ethical sales. His personal mission is to create a high value for others by living his life with passion and total integrity. He realizes the key in this pursuit is the constant striving for self-improvement. He’s pictured above with his wife Monika. Marco is on Facebook, LinkedIn and Twitter if you’d like to reach out to him.
Sean

Patrick resides in Ireland. Although we both enjoy good ale we didn’t meet in a pub. We met because of this blog and Facebook. After having read my blog Sean reached out to me on Facebook and we started chatting then exchanging massages because of our interest in training, particularly influence. Thanks to technology (Skype) we now video chat with some regularity.

Sean has more than 15 years experience in generating high value, high turnover strategic business. He has worked in roles ranging from inside sales, account management, new business specialist, and sales management. He’s been a business owner in six different companies in the technology sector. He’s managed multiple teams of salespeople in different geographic locations across the UK and Irish Republic. His reputation for ruffling feathers and getting business in the door quickly is legendary. In addition, he’s coached and continues to coach salespeople from all industries because he is passionate about the art of negotiation and customer service.

Sean’s interest in persuasion began in the late 1990s. He wanted to know what motivated people to buy and what factors made people hesitate to say “Yes” even if price was irrelevant. As if this isn’t enough, Sean is master practitioner in NLP. Well-read and familiar with leading persuasion authors, Sean also enjoys reading academic papers on psychological persuasion. He believes it is important to explore what we know and what we learn. He advocates putting everything into practice as often as possible while continuing to learn from those with whom we interact. You can find Sean on Facebook, LinkedIn and Twitter.

To learn more about Sean visit his training site, Sean Patrick Training, and check out his blog, Professional Persuader.

e Marta hails from Spain but gets around quite a bit having conducted lectures, seminars and training sessions in Spain, Mexico, Chile, Puerto Rico, Nicaragua, Panama, Honduras, El Salvador, Bolivia and Colombia. He contacted me because of his interest in persuasion and possibly pursuing the CMCT designation. His list of current undertakings is quite impressive: Consultant and trainer in personal communication and persuasive oratory; Trainer of Directors and Spokespersons; Political Candidates trainer in Spain and Latin America; Debate coach for teams from the University of Zaragoza, Pablo Olavide, Seville, Cordoba, Diego Portales (Chile), Uniminuto (Colombia), CIDE (Mexico) and American (Puerto Rico).For 12 years Yago has being training people and candidates to speak fluently and persuasively in areas such as parliamentary debate. He’s a fiery competitor, having received major awards for his debate skills in Spain and world-wide competitions. He was a champion runner-up in 2005 and 2004 Spanish debates and runner up in 2005 and 2004 in the World Debate in Spanish.The technique Yago applies in his training is derived from his experience working with thousands of different personalities who are trying to become good speakers in complex situations. His style relies on practical learning where participants take into account their potential as they sift through weaknesses and improve strengths. The results obtained can be seen within the first hour of training because the tools used match up to the ability and style of each individual participant. In training workshops led by Yago people develop techniques to enhance their emotional intelligence, NLP, Social Psychology and Persuasive abilities, ethnomethodology, Institutional Communication Techniques Enterprise and, of course, classical rhetoric. All this requires a keen sense from Yago for detecting the skills and qualities that can be improved in each person. Yago has prepared many political and parliamentary leaders, sales teams and managers. He has explored the application techniques of debate to the teaching of bioethics, has improved the teaching skills of teachers and students, and has personally coached leaders in important positions responsible for many different projects and companies. Feel free to connect with Yago on Facebook and LinkedIn.Hoh

Kim is from South Korea but we met in Arizona in January 2008. We were both there to go through Dr. Cialdini’s certification training. Hoh is one of the two dozen Cialdini Method Certified Trainers (CMCT) in the world and he’s the first person to present the Principles of Persuasion (POP) workshop in South Korea. He is the founder & head coach of THE LAB h, where he counsels business executives and high-ranking professionals in government and medicine to positively influence their stakeholders.

With over 10 years of experience in strategic communications consulting, executive media coaching, and crisis simulation and workshop design/facilitations, Hoh is one of the most sought after consultants, coaches and speakers in the area of crisis communication management and crisis leadership. His client base ranges from local non-profit organizations to consumer electronics companies in Korea and multinational companies listed on Fortune Global 500. Find out more about Hoh at his website, THE LAB h , or by visiting his blog, Cool Communications. You can connect with Hoh on Facebook and LinkedIn.

Globalization is here to stay, even if we never move. In all likelihood it will only accelerate as the world seems to get smaller with technology. We will be interacting with people all around the planet and because cultural differences impact the persuasion process it is good for us to learn about those differences. I hope you enjoy exploring the different perspectives on influence and persuasion from this group if international experts. Look for the first guest post on April 5th and the first Monday of each month thereafter.

The Upside and Downside of Fixed-Action Patterns

The Politics of Fear: They’re Trying to Scarcity the Hell Out of You

Overcoming Youth or Inexperience in Business

Pre-suasion: Unity Means Together is Better

Influential Words of Wisdom from the Lord

Influencers from Around the World - You Think You Don’t Have Authority? You’re Wrong!

Upcoming Interview on BlogTalkRadio Is Expert Advice Always Worth the Price?
Scroll to top